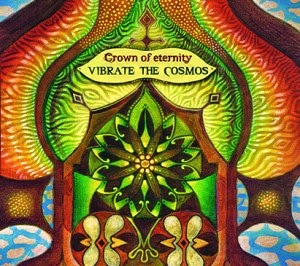 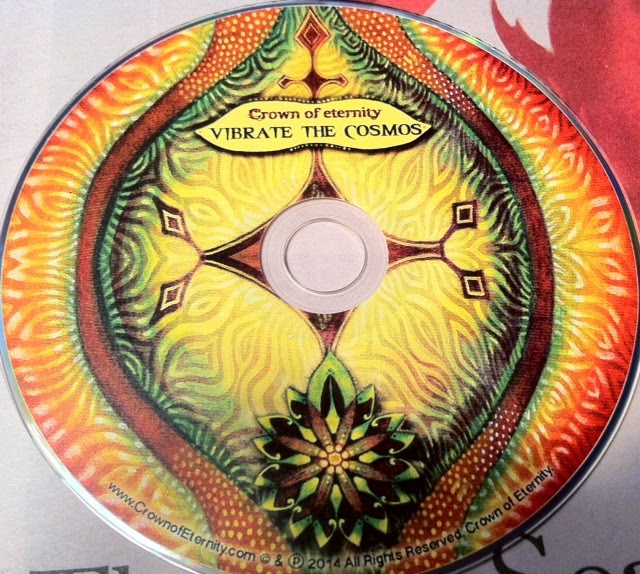 Trichome power! Peace and love to my friends at Humboldt Relief :)

The ethereal soundscapes and blissful chants that comprise Vibrate the Cosmos plant the flowers in your mind and then stick around for the crystal covered harvest. Crown of Eternity is the husband and wife duo of Mike Tamburo and Gallina Tamburo. However, this is more than a musical project. Mike and Gallina teach Kundalini yoga in Pittsburgh and operate a yoga and vibration healing center, Crown of Eternity. If I could select one word to describe Vibrate the Cosmos, then it would be "immersion." For well over an hour, Mike and Gallina stimulate your awareness through renditions of sacred Kundalini yoga mantras and heady soundscapes that combine psychedelic, ambient, shoegaze and looping music. The detailed liner notes provide background on each mantra. For over a few years, I have been listening to Mike's music. At the cross-section of his many projects, Mike's soul shines brilliantly to endow the listener with serenity and warmth. With Gallina joining Mike, they create one of the most beautiful releases with which he has been associated. The lush instrumentation supports the vocals appropriately; it creates a tranquil environment in which their voices soar majestically. Traversing a magnificent rainbow arc from beginning to end, layered chants and vocals illuminate barren areas. Omnipresent in my favorite track, "Ecstatic Har", Mike and Gallina's energy flows unabated. Mellifluous, melodious and imparting heavy vibrations from the beginning, the entrancing chant and instrumentation is a manifestation of the lucid awareness referenced in the album title.

The beginning of "Ra Ma Da Sa" is the sonic equivalent of dawn and sunrise. Embryonic vibrations resonate delicately in the beginning. Shortly, radiant beams of guitar echo and the duo's vocals gradually grow in vitality. Psychedelic particles sparkle among the stars in the following track, "Ang Sang Wahe Guru." Sonorous, heartfelt vocals combine with dreamy guitar. Later in the track, synthesizer disperses infinite healing vibrations among all denizens. The spacey intro to the next track has the vibe of the more recent Expo '70 releases. The mantra recited by Mike and Gallina rises and falls in the manner of the breath. Gallina's piano adds to the track nicely. Subsequent to "Ecstatic Har", tremulous notes mix with a languorous recital of words from Guru Arjan, the 5th Sikh Guru.

According to the liner notes, Crown of Eternity's music is written and arranged with A tuned to 432 hz aligning with Universal vibrations. I often find myself rejoicing and singing to the energy that flows from the breathing speakers. One can purchase a copy directly from Crown of Eternity.